Let the Disneyfication of Wrigley begin 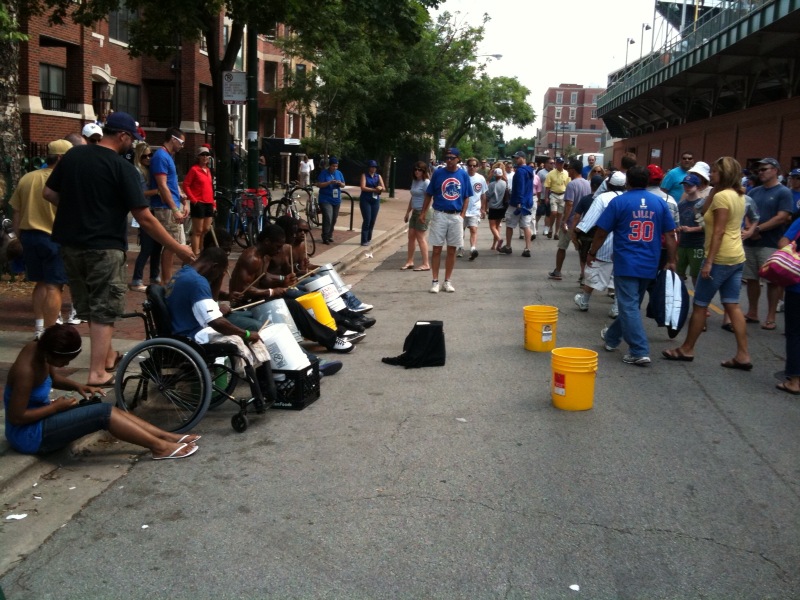 The Chicago alderman whose ward includes Wrigley Field wants to ban street vendors and the so-called 'bucket boys,' those kids who pound on overturned buckets with drumsticks, from the perimeter of the Friendly Confines. "Let the Disneyfication of Wrigleyville begin," declared Ald. Thomas Tunney.

Actually, I made that up. What he really said was that it's a "public safety issue," which is, of course, comical. I can see if you have complaints about the noise, but public safety has nothing to do with it. Here's a video I shot of the drummers on Sunday playing along Sheffield Avenue:

As you can see, Sheffield is closed to cars and fans are having little trouble moving around. There are vendors nearby hawking t-shirts and other stuff, but again, there's no log-jam of fans unable to move. I'm sure Tunney has received complaints from local residents about the noise, but I'm wondering if the bigger issue might be complaints from shopkeepers losing sales to the street vendors. This article from the Chicago Tribune quotes a Cubs spokesman as saying he supports Tunney, which isn't the least bit surprising. The Cubs like to sell t-shirts, too.

If Tunney is successful it would be unfortunate. One of the charms of Wrigley is that it's situated in this incredibly busy, dynamic urban neighborhood. Yes, it's noisy and messy and full of bars and restaurants and hot dog stands and all different kinds of people. And there are homeless people begging for change and smelly buses idling and the El rattling overhead - loud as hell, by the way. And then 40,000 people come pouring out of this ancient ballpark and into the neighborhood.

So find something else to harp about, Ald. Tunney. How about asking the Cubs about their obscenely high ticket prices or the scalping service they set up? Why don't you look into the extortionate rates for food, beer and bottled water inside Wrigley or the fact fans consistently arrive late to games because the CTA can't get the trains to run on time? Why don't you call Jim Hendry before the City Council and ask him what the hell he was thinking signing Milton Bradley?

There are plenty of issues you could be tackling that could make the Wrigley experience better for everyone. But leave the street vendors and bucket boys alone.

Amen! Welcome to Chicago! Alderman Tunney and Jim Hendry better spend more time trying to find a way the Cubs can win a World Series. The Red Sox were able to finally do it, as were the White Sox! Go Cubs - stop worrying about the street vendors and bucket boys. You have bigger fish to fry!