Goodell wants more games, but this fan says 'No thanks' 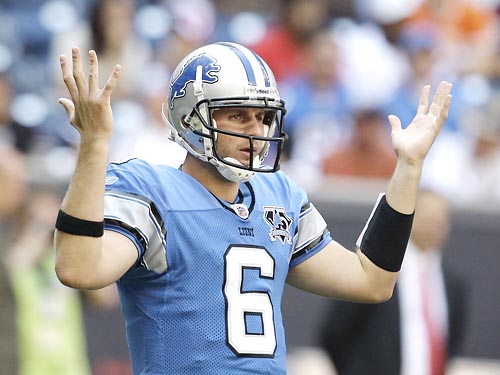 The Chicago Bears tore out to a 7-0 start in 2006 when they hosted the 1-6 Dolphins in early November at Soldier Field. The result, a 31-13 Miami win, would have to be considered an upset in the traditional sense.

Only it wasn't. The Bears mailed it in that day. They had been on an impressive and surprising run, and were due for a let-down. Sure, they had the wildly inconsistent Rex Grossman at quarterback, and against the Dolphins he was most definitely playing the role of Bad Rex. But the entire team, including the much-hyped defense, looked slow and uninterested.

The Bears would recover from that hiccup to finish the season 13-3 and in the Super Bowl, while Miami went 6-10. Chicago had the much better team... which was little consolation as I sat in Soldier Field that day. They weren't offering discounts on beer and hot dogs because the home team wasn't really there, and team officials weren't manning the exits to give fans refunds on their way out.

But that's the NFL. And it's why Roger Goodell's announcement that the league is considering adding more regular season games is a terrible idea for fans. I know that sounds contradictory, because I say it as a huge sports fan and someone who loves going to games. In fact, my brother and I are so passionate about it that we started a business (www.wiseguidesonline.com) surrounding the experience of attending games.

But I can say with supreme confidence that if (when) the NFL expands to 17 or 18 regular season games, they are inviting further mediocrity. Goodell says he's responding to fans' complaints about the meaninglessness of pre-season games, but in trying to create more meaningful games he's likely to do the opposite.

More games will only mean that each contest means less, not more. There are already too many games like the one I mention above, where one team is down because they had a road game the previous Monday night or are coming off a tough contest with a divison rival. Add another game or two and these will only multiply.

I would even go so far as to argue that there are too many games already, and that the league would be better off going back to a 14-game schedule. Talk about meaningful games!

For those that would argue otherwise, I'd say take a look at the 2008 regular season. The Arizona Cardinals lost four of their final six games and were blown out in three of them, including a 47-7 defeat to the Patriots in the penultimate game of the season. Wow, those games must have been  really meaningful. The Cardinals seemed to figure it out - or started to play - in the post-season and ripped off three wins in a row to qualify for the Super Bowl for the first time.

The NFL is far from alone in this trend. I believe all the major sports would benefit from cutting their schedules by about 10 percent. And that, of course, is never going to happen. Too much money is to be made on all those games, no matter if the players on one team are thinking more about where they're going to dinner that night.

There is one saving grace for the season-ticket holders among us out here: Goodell suggests that an additional game might be played at a neutral site, possibly overseas. So we might not have to pony up for a ninth home game, after all. I'm sure the players and coaches will be fired up for that mid-season road-trip to London or Madrid.

At least the fans there probably won't recognize the lackluster effort on the field, and I won't have it pay to see it in person.